Foxchapel is a beautiful subdivision out West on River Road, in Richmond, VA. It is very close to the Goochland County line. The average home sale price has remained above $450,000 for the past ten years, but 2012 has been an interesting year. As of this writing, October 10, 2012, the average home sale price in Foxchapel is back to its 2003-2004 levels. Read more to see the accompanying chart. 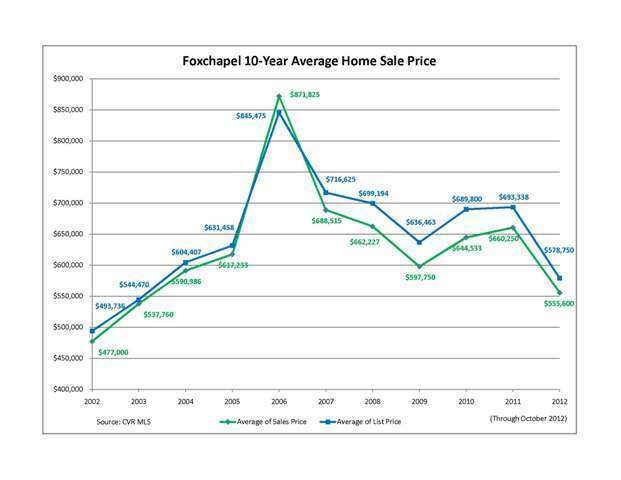 You will also note that the average list price, charted on the blue line, is just now starting to inch down to realistic levels. The list price line is the price at which the Sellers listed the home for sale. As far as I can tell, these numbers are the original list price and not an adjusted list price during the time the home was on the market. I will verify this.

But if we take a moment and look at the actual list price versus the sales price ratio we see the following:

This indicates that from 2009 – 2011 Sellers believed that their home value was much more than what Buyers were willing to pay.  Sellers during this time period were getting between 93 and 95% of what they were asking for in sales price.  2012 is looking to be a better year for Sellers in achieving their desired sales price OR Sellers are lowering their expectations and listing their homes for less.

In a separate posting, we will examine the days on market statistics as well as what the county assessment for the Foxchapel subdivision.  Stay tuned.